There are striking resemblances in the ambition that Gupta, owner of Liberty Steel Group. But there is also a significant difference

By Moneycontrol.com
Image: Russell Cheyne​/ Reuters
Not since LN Mittal has anyone shown a similar ambition in building a global steel empire, like Sanjeev Gupta. The strategy is nearly the same - pick up loss making mills across the world and turn them around.

Gupta though seems to be in more of a hurry, adding up capacity in a rate that Mittal, Chairman of the world's largest steelmaker ArcelorMittal, may also admire. While Mittal had started his entrepreneurial journey in the 1970's, culminating in the merger with Arcelor in 2006.

On the other hand, Gupta, who also resides in the UK like Mittal, has risen from relative obscurity over the past five years, transforming a family trading business into a metals conglomerate. Apart from steel, Gupta's GFG Alliance also produces aluminium. The Alliance's unit Liberty Steel Group operates the steel business, which is spread across Europe, Asia, Australia and the US.

In fact, Gupta recently roped in Paramjit Kahlon, an erstwhile ArcelorMittal veteran, as the CEO of the Alliance's primary steel and integrated mining businesses. Kahlon was most recently heading ArcelorMittal's businesses in CIS countries and the Middle East.

Ironically, Gupta is expanding his steel business even as Mittal has consolidated it. ArcelorMittal, which in 2007 had a capacity of 130 million tonne, produced a little over 97 million tonne in 2019.

Though the World Steel Association doesn't list Liberty Steel Group, Gupta claims that the company has a capacity of 18 million tonne a year, which would make it the 16th largest steelmaker in the world. In other words, Liberty Steel Group will be larger than and Steel Authority of India ().

But there is a crucial difference in the way Gupta envisions his steel empire. For an industry that probably has the largest carbon footprint for any manufacturing sector, the 49-year-old Gupta leads the advocacy in producing green steel. The billionaire businessman has even trademarked the concept and calls it, GREENSTEEL.

"Our industries - metals and energy - have been and will continue to be critical for the evolution of mankind. The distress in these sectors is an opportunity for us. We are turning headwinds into tailwinds. We have turned from primary to green steel (using renewable energy to melt scrap into steel)," he had told Moneycontrol in an earlier interview.

While it makes for great headlines and optics, industry executives point out that Gupta's stress on environment also makes for sound business sense. 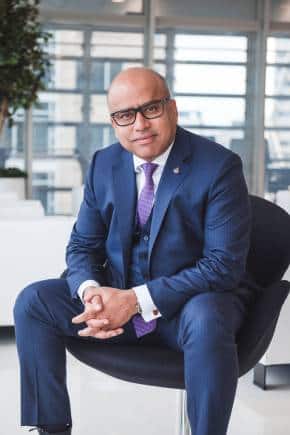 Gupta, who was born in Punjab, was 13 when his industrialist father enrolled him at a boarding school in Kent. He founded Liberty House in 1992.

But he first came under the spotlight much later in 2013, when he bought a loss-making steel facility in Wales. He turned around the operations and saved almost 200 jobs. The British media hailed him as the ‘white knight'.

The big moment came in 2017, when Gupta bought multiple units of , which was struggling to turn around its plants in the UK. When Prince Charles inaugurated the resumption of the facility later, he asked Gupta, ‘What are you going to do differently? Can you do it when Tatas couldn't do it?'

It's a question many have asked, as Gupta not only turned around the units that were making losses, but also started making profits. In an interaction with Moneycontrol in late June, Gupta recounts with a chuckle, "Many did call me crazy, when I first talked about green steel and recycling."

A senior industry executive, who has worked across the globe, gives a peek into Gupta's strategy.

"To make one tonne of steel, one needs four tonne of material, including iron ore and coal. All these involve intense mining. And then the process of steelmaking through the blast furnace route itself has a huge carbon footprint," the steel veteran, who requested not to be quoted, said.

Despite the pollution it creates, steel has a redeeming factor. "It has a unique quality, compared to other metals. It can be recycled much better than other metals and has a longer life cycle. So instead of using iron ore, one can use scrap to convert it into steel," the executive added.

Gupta is precisely working on that.

To follow the strategy, the entrepreneur wants to set up electric arc furnaces, instead of traditional favourite blast furnaces, to make steel. Arc furnaces convert scrap into steel. Ironically, his showcase facility is coming up in Newport, which is close to

The Newport plant will have a 2 million tonne electric arc furnace that will use local scrap to make steel. Not just that, energy - which is expensive in the UK - will come from a power plant next door. The power plant "is undergoing the world first conversion that will see it use end-of-life waste that currently go to landfills as its raw material, instead of coal.”

This is music for the ears of policymakers in Europe, where countries are looking to reduce emissions, and have also imposed penalties on those with higher than permissible carbon footprint.

But even as Gupta makes the right sounds and seemingly moves from one acquisition to the other, questions have also been raised on his growing empire.

There were also concerns of related-party transactions involving Wyelands Bank, owned by the Alliance. The Group had earlier this year closed its other bank, Commonwealth Trade Bank, within a year of acquiring it.

Responding to the criticism, the Alliance last year had promised to release consolidated accounts in early 2020. Later, group companies changed their accounting years to end in June, from March. But in April, the change was taken back.

While these may not instil confidence, sources close to Gupta said the entrepreneur wants to list his steel business, something that will automatically allow closer scrutiny of the books.

The COVID-19 disruption has forced Gupta to pause; literally, for a person who takes 300 flights a year traveling around the world in his private jet.

"We don't want to dump steel in the market. We will keep adjusting our production according to market demand. We have also set a target of improving efficiencies by 30 percent," Gupta said.

This has meant that a significant number of the Alliance's over 30,000 employees may also lose jobs.

But the setback doesn't mean that Gupta has lost sight of his expansion plan. The Rotherham unit, for instance, will double its capacity in the next one year. In Australia, Gupta wants to turn around the steel facility and set up an electric arc furnace.

He has similar plans for India, where Liberty finally got a presence through its acquisition of Adhunik Metaliks. "In India, we want to use lower carbon technologies such as hydrogen and DRI (directly reduced iron)," Gupta said.

The expansion pace though will come down. "The COVID-19 situation may last for anywhere between a year to two years. We are planning our budgets accordingly," he stated.

The pause apart, it's clear that the entrepreneur is raring to get back to the skies.

Click here to see Forbes India's comprehensive coverage on the Covid-19 situation and its impact on life, business and the economy​

For hassle free instant subscription, just give your number and email id and our customer care agent will get in touch with you